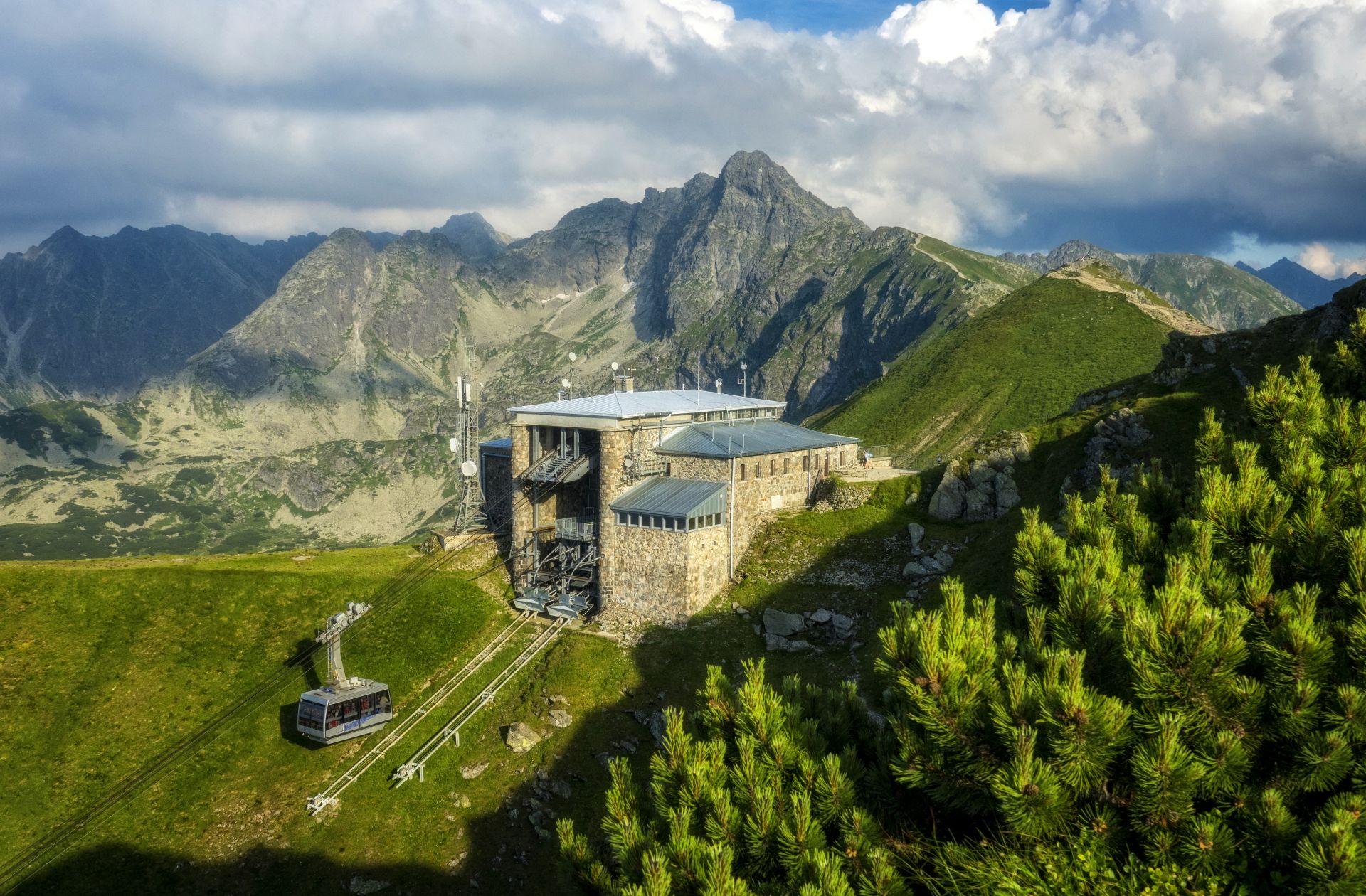 A cable railway from Kuźnice to the top of Kasprowy Wierch, the whole runs through the area of the Tatra National Park. The railway operator is Polskie Koleje Liniowe S.A. The route to Kasprowy Wierch, though it is 4291,59 meters long, it takes only a dozen minutes or so, thanks to the only high-altitude ropeway in Poland. The wagons carry only 60 people at a time, and the trip by the wagon suspended over the Tatra valleys stays in your memory forever, and it’s full of exciting experiences and amazing views. The journey ends at 1959 meters above sea level in the upper station of the railway, just 26 m below the top of Kasprowy Wierch. The upper cableway station and the Meteorological Observatory are the highest-located buildings in Poland.

Kasprowy Wierch is one of the most recognizable mountains in the Tatras. This peak, located on the border of the High and West Tatras, offers unforgettable landscapes that can be admired endlessly. From the height of almost 2,000 m above sea level, there is a magnificent panorama of the gentler hills of Czerwone Wierchy and of the much sharper peaks of the High Tatras (including Świnica and Orla Perć). You can also see Giewont, with a cross and legendary knights sleeping somewhere in the rocks; the favorite destination for many tourist trips.

From Kasprowy, you can also admire the Slovak part of the mountains, and even descend into the Ticha Valley (Cicha Liptowska). There are many tourist routes crossed here that lead to the valleys or the surrounding peaks. Tourists can eat something good in the restaurant and admire the local meteorological observatory.

At the foot of Kasprowy, there are two cirques: Gąsienicowy and Goryczkowy, descending with gentle meadows towards the Murowaniec hostel and huts at the Hala Kondratowa. You can relax there, drink warm tea and bask in the sun, watching the cloudy music and small figures moving around them.


History
The initiator of the railway construction was the then-president of the Polish Ski Association and Deputy Minister of Transport Eng. Aleksander Bobkowski. Field studies and measurements to determine the course of the railway route were initiated by the Central Office of Studies and Projects of the Polish State Railways commissioned by the Ministry of Transport in the spring of 1934. The decision to build was made in July 1935. The investor was a specially formed company (ltd.) under the name "Society for Construction and Operation of the Cable Car Zakopane (Kuźnice) - Kasprowy Wierch" with headquarters in Warsaw. The shareholders were: Polish State Railways, Tourism Support League, Polish Travel Office "Orbis", Society for the Promotion of Skiing and the Gdansk Shipyard.

On July 24, 1935, the construction management was established, based in Zakopane Kuźnice. The construction manager was Eng. M. Stadnicki, deputy engineer B. Lange. A detailed schedule was determined by the record-breaking short construction time of 7 months for such an investment. Since no company was able to accept such conditions, it was decided that the construction of an economic system would be conducted. The number of the crew members, which initially amounted to around 600 people, in the last two months was increased to 1000. Workers were recruited not only from the Podhale region, but also from Nowy Sącz, Cracow, Tarnów and even from the Vilnius region. Employment of skilled stonemasons from Brasławia and weavers and carpenters from Polesie. works on the site began on August 1, 1935.

The construction of the railway caused a lively social discussion, mainly environmental protection activists protested against it, though in addition to the State Council for Nature Conservation, there were also 94 societies and scientific and tourist institutions. In response to the beginning of the construction, the whole of the then-National Council for Nature Protection, including the head of the Committee for Nature Conservation in Krakow - Prof. Władysław Szafer - resigned. Their resignation was notaccepted. The construction of the train lines led to other investments: the observatory on Kasprowy Wierch, the so-called ceprostrad (from the Morskie Oko to Szpiglasowa Pass), the hotel on Kalatówki.

It was the first investment of this type in Poland, and the sixth in the world. It consists of two sections that are independent of each other:from Kuźnice to Myślenice Turna (launched on February 26, 1936, a test run of one wagon on this section was made by a Bleichert fitter on February 17, 1936) and from Myślenice Turnia to Kasprowy Wierch. On each stretch, two wagons were suspended on one line - one moving up and the other down. The machines were built by the shipyard in Gdansk, while the ropes - the factory in Sosnowiec. The investment was created and constructed at a record pace of 7 months.The work was completed on February 29, 1936, the first passengers entered Kasprowy Wierch on March 15, 1936, after 227 days from the commencement of construction.For importing materials, a road was built for Myślenice Turnia, where the trans-shipment of cars into horse-drawn Hutsul carts took place, which then transported building materials to Hala Gąsienicowa. Materials (cement, rope, water) were transported on the backs of workers from there.The works were carried out for 2-3 shifts (16 hours a day). The buildings of the lower station in Kuźnice, the central one at Myślenice Turnia and the last one at the top of Kasprowy Wierch were designed by Anna and Aleksander Kodelski.The cable railway to Kasprowy was a prestigious propaganda investment of the Second Republic of Poland and presented the then innovative Polish technology and architecture.The cost of building the railway amounted to over PLN 3.5 million and it was paid off before 1939.At the upper station, in 1936, a Polish emblem in the Art Deco style (preserved until today) was placed. The same year, architect Aleksander Kodelski, in order to celebrate the construction of the railway, created a modernist villa in Warsaw (currently historic, ul. Czarnieckiego 53), which is a copy of the lower station of the railway to Kasprowy Wierch.In 1961, the railway was modernized by replacing the wagons with new ones. In 1985, on the occasion of the jubilee of the 40th anniversary of the existence of the cableway to Kasprowy Wierch, a film commemorating its construction history was created, the film "Towards the Tatra Peaks" was made by Wytwórnia Filmów Dokumentalnych.

On May 6, 2007, the last course of the oldest cableway in Europe took place before its thorough renovation. Plans to expand the railway and to increase its capacity, analogous to the plans for the construction of the railway itself in 1934, triggered protests of scientists (including naturalists), environmentalists and the opposition of part of society.For more than 70 years, the railway has carried over 38 million passengers. As agreed, the modernization was completed on December 15, 2007.

When you are in Zakopane and you don’t enter Kasprowy, it's like being at the seaside and not getting your feet wet. Are you on vacation, vacation, meeting in the capital of the Polish Tatra Mountains? You can’t miss this opportunity - go up! 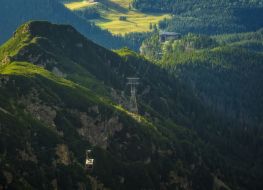 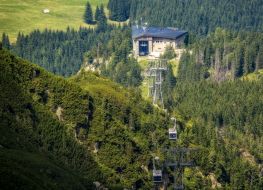 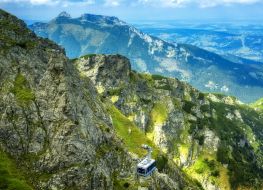 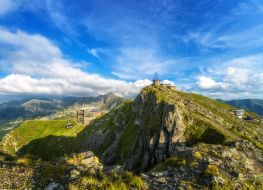 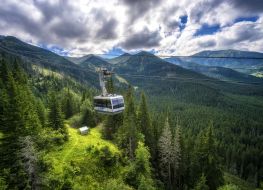 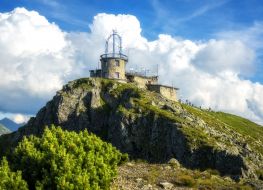 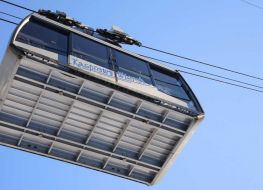 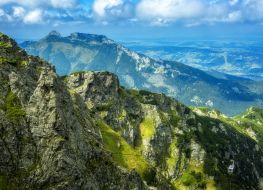 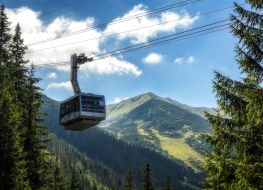 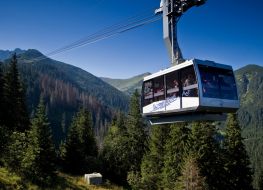