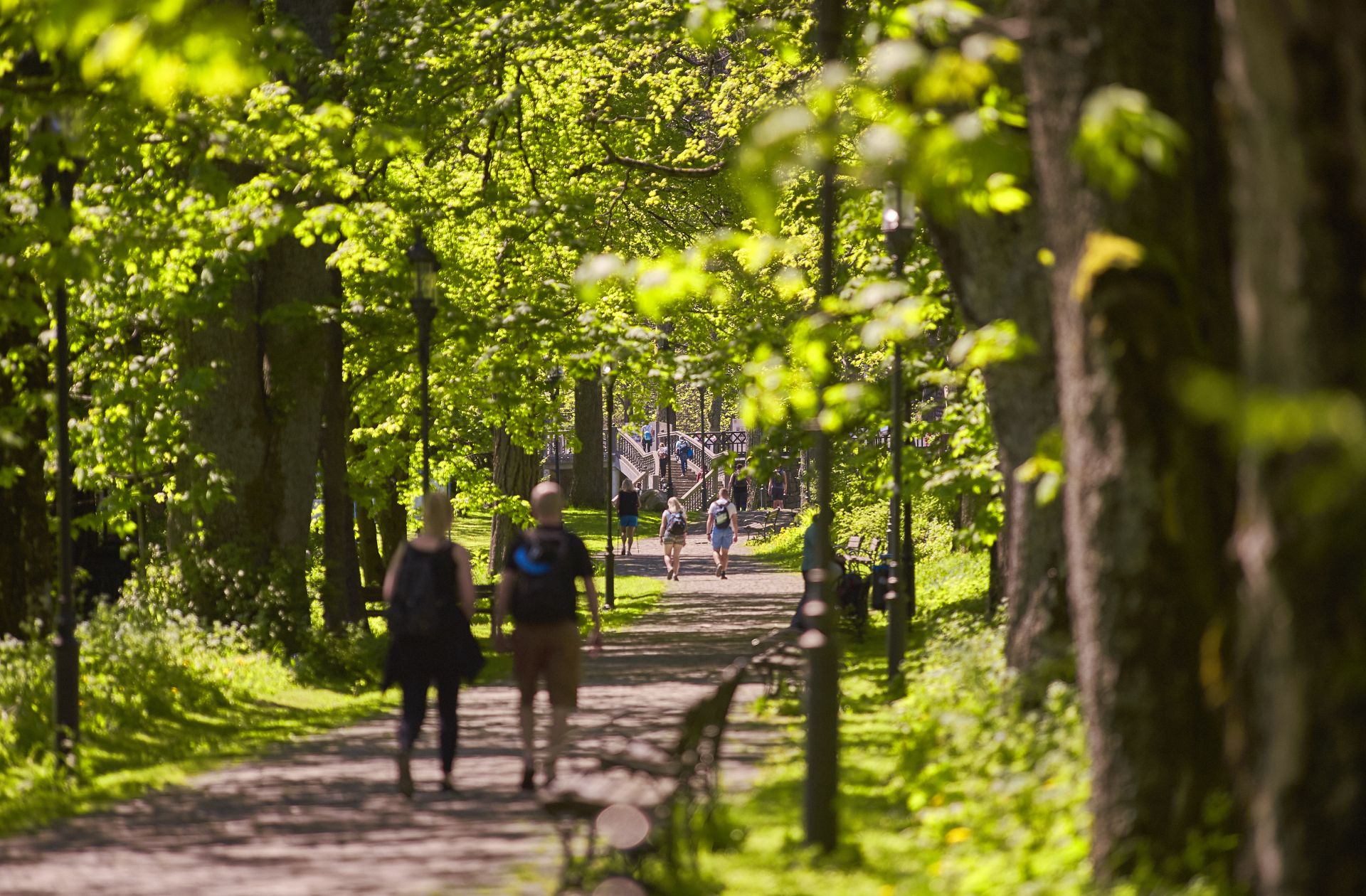 Kuźnice is a part of Zakopane located at the very foothills of the Tatra Mountains, at the elevation of approx. 1,000 m a.s.l. Presently, it is a hub of tourist traffic (a starting point for a number of tourist trails, and the location of the bottom station of the cableway to Mt Kasprowy Wierch). The story of Kuźnice goes all the way back to the 18th c., when iron ore was discovered within the slopes of the adjacent Dolina Jaworzynka valley.

We start our brief tour at the John Paul II roundabout, heading south and uphill along the Przewodników Tatrzańskich avenue, lined with trees, some of them over 150-year-old ashes, sycamores and larches.

Approx. 10 minutes from the start of our walk we pass by the Księżówka - a Retreat House of the Polish Episcopate (al. Przewodników Tatrzańskich 2). The oldest, wooden part of the house was built around 1875. In early 20th c. the house, at the time known as "Adasiówka" was held by Bronisław Chwistek. His son Leon, Stanisław Ignacy Witkiewicz - Witkacy, Bronisław Malinowski and Janusz Chmielowski used to stay there. Many prominent Polish clergymen used to pay their visits to the Księżówka, including cardinals Adam Sapieha, Stefan Wyszyński and Karol Wojtyła. John Paul II stayed here during his papal visit to Zakopane in June 1997. His room has remained unchanged ever since.

After a few more minutes you can see to your left the characteristic limestone-dolomite outcrops of Mt Nosal (1206 m a.s.l.). Not far from that point, on the other side of the Bystra stream, a green trail to the summit begins. Short and easy, if rather steep, it will lead you to the very top of Mt Nosal which commands an impressive panorama of part of the Tatra range and Kuźnice right below. Around the summit area there are some much weathered remnants of pine woodland. Hiking down another trail you will soon reach the Nosalowa Pass and then Kuźnice. The trail to the top of Mt Nosal from the Bulwary Słowackiego streamside lane: distance of about 1 km, elevation: 246 m, walking time: about 45 min. To Kuźnice - approx. 1 hour 15 min.

The "Prometheus gunned down" Monument

Approx. 25 minutes from the start of our walk, to the right, you can see a characteristic monument by Władysław Hasior. It was erected in 1964 with a view to commemorating 20 Poles shot by the Germans on this site on May 30, 1944.
The al Przewodników Tatrzańskich avenue continues straight on, passing by the first waterworks facility in Zakopane (on the right), up to the bottom station of the cableway to Mt. Kasprowy Wierch. We take a left turn at this point and enter a stone paved park road which leads us to the manor house - parkland complex in Kuźnice


The Granary and the Coach-house

What we are about to enter is hardly the domain of Tatra spruce forests, but that of a manor house and a parkland instead. Immaculately trimmed lawns, a spouting fountain in the very midst of manor house courtyard - all these are the remaining memorabilia of the Hungarian Homolacs family which owned Kuźnice in the years 1807 - 1870. In the 18th and 19th centuries Kuźnice used to be a metallurgical centre, one of the largest ones in Central Europe. A large blast furnace used to be sited in the very place from which the cable car to Mt Kasprowy Wierch presently departs. The smelter in Kuźnice offered decent jobs for lots of labourers who kept on swarming into Zakopane on the lookout for a chance to improve their living conditions. In 1889, the entire Kuźnice real estate property was bought at an auction by Count Władysław Zamoyski.

To the left, at the back of the manor house - parkland complex, a large building attracts the eye. This is the HQ of the Tatra National Park (Kuźnice 1). In the years 1891 - 1939, it used to accommodate the School of Domestic Chores for Women, founded by Jadwiga Zamoyska, general's wife, the mother of Count Władysław Zamoyski. The original site where the manor house once stood is located in the midst of the lawn, right beyond the fountain. There is a chance to visit both the Granary and the Coach-house, where the exhibition of Antoni Kocyan's fauna is presently accommodated. Outdoor exhibitions are frequently set up just opposite the Coach-house.

The bottom station of the cableway to Mt Kasprowy Wierch

Built in 1935/36 in a record time, i.e. within just 7 months, it was a major development which in the interwar period actually turned Zakopane into one of the most popular ski resorts across Europe, and Mt Kasprowy Wierch was soon dubbed "the sacred mountain of skiers". Modernized in 2007, in summertime the cable car is capable of lifting 180 persons per hour, whereas in wintertime - 360. The car's capacity is seasonally adjusted by 50% to meet the environmental constraints in place. Aleksander Bobkowski, in the interwar period a deputy minister of transport, an ardent promoter of downhill skiing, was the initiator of the cableway construction. The then President of the Republic of Poland - Ignacy Mościcki - graced the opening ceremony with his presence. The intermediate station is located halfway at the Myślenicekie Turnie, while the top one just beneath the summit of Mt Kasprowy Wierch.

Kuźnice is also a popular starting point for several hiking trails into the Tatras, including Mt Giewont, Mt Kasprowy Wierch, and the Hala Gąsienicowa. We suggest a short hike along the blue trail to the Albertine monastery and the hermitage of Brother Albert. The uphill approach will take us about 15 min.

The Albertine nunnery and the hermitage of Brother Albert
Services held, sightseeing tours available to the public

The hermitage was established in 1901, the nunnery- in 1902, most likely to the original design sketches of Stanisław Witkiewicz, who used to be close friends with Brother Albert (Adam Chmielowski). From here the yellow trail goes to the Albertine monastery on the Śpiąca Góra (it takes about 30 min. to get there from the Albertine nunnery). 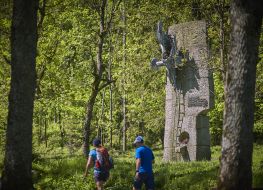 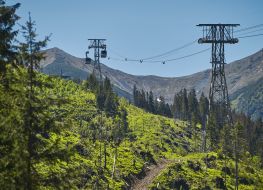 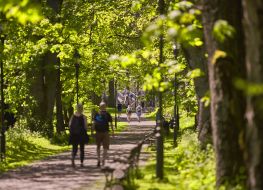 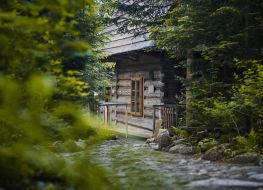 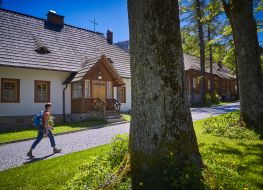 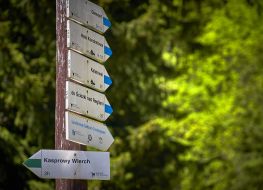 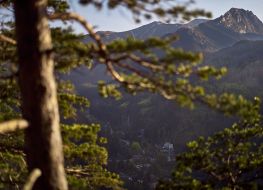