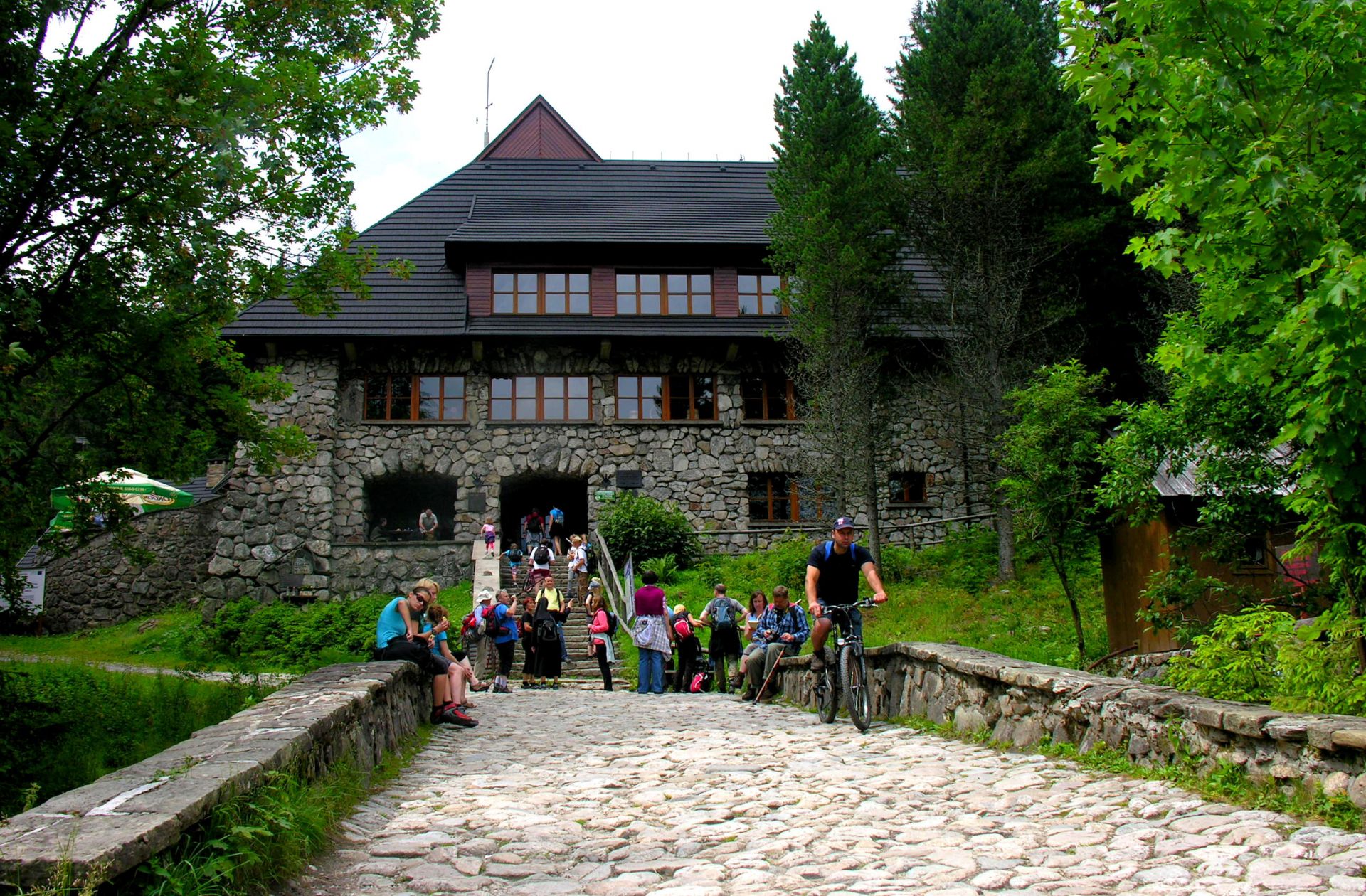 This shelter is the best accommodation for Western Tatra expeditions. Chochołowska Valley, which exit is around 10 km from Zakopane, is a largest valley in Tatra, covering above 35 km2. Covered with spruce forest, is most beautiful in spring, when crocuses are blooming and sheep pasturage begins in mountain halls. The structure is located at 1148 MASL, its volume is 9543m³ which makes it the largest shelter in Polish Tatras. Open any time of year.

History
Shelter location was carefully picked. During local vision in 1928, southern edge of Chochołowska Clearing was chosen, because of it great ski valors. The first shelter was built by Warsaw Ski Club in years 1930-32. In 1931, it was possible to sleep inside not yet finished shelter, as official opening took place in 1932. In January 1945 it was burned by Germans. Current building was raised in years 1951-1953. During his second pilgrimage to homeland, pope John Paul II resided in Chochołowska Valley on June 23 1983. This visit was commemorated by memorial board next to shelter entrance, and also by creating a pope trail in Jarząbcza Valley. There is also a sculpture inside shelter – a gift to pope from Lech Wałęsa. In year 1958, a small water plant was launched on Chochołowski Stream, for shelter's needs. It generates elecricity (not only) to heat the shelter. Pines were planted next to the shelter. To honor a TOPR rescue operation from 11-12 february 1945 (wounded partisans transportation from Skrajny Salatyn), the memorial board was embedded into the wall. Another memorial board was located on the wall to commemorate Gwiazda Polski baloon test start on Chochołowska Clearing in November 1938.

Currently
There is a Pope Mountain Tourist History Institute located in shelter, with its exhibition honoring meeting of Pope John Paul II with Lech Wałęsa, which took place on 23 June 1983. This hall is available for visitors from 8:00 to 20:00.
There are also shepherd's huts on Chochołowska Clearing, which constitute for the largest summer village in Tatry. From May to September lasts a cultural sheep pasturage, with oscypki, bundz and żentyca available at the hut.
Shepherd Chapel under saint John the Baptist offers indulgences every last Sunday of June. Also, Holy Masses from the end of June to September and during Christmas and Easter.

Accomodation
Shelter offers 121 sleeping places in rooms of various sizes and standards, 2, 3, 4, 6, 8 and 14 person.
Because of National Fire Watch regulations, we are obliged to limit the number of substitute accomodations (on floor) to 20.

Pope trail – during his stay in Poland, in year 1983, Polish pope, John Paul II arrived at Chochołowska Valley in Tatra for a short rest. He was hosted in PTTK shelter, from where he went on touristic walk to Jarząbcza Valley, with accompanying people assist. In the shelter, he took off his “formal” shoes, put on warm socks and tourist boots and departed along the red trail. After leaving the shelter, he went down the path to Chochołowska Clearing, stopping by shepherd's hut of Andrzej Gala Zięba from Witów, who worked on Chochołowska Clearing at that time. The pope entered the hut, greeted highlanders and said that he'll pay them another visit on way back. After a short rest, together with his company, the pope went along the red trail, through the small bridge, towards Wyżnia Jarząbcza Polana. Here, near antique chapel from 1872, people assisting the pope stayed behind, letting him stroll trough this magnificent hall alone and in focus. At the small bridge on Jarząbczy stream, the team was whole again. The route ran trough beautiful, Tatra spruce forest. Trail constantly goes mildly upwards. Pope talks about mountains and recollects his older expeditions. In this relaxed mood, the group would reach even Trzydniowiański Wierch, if not for punctuality of people looking after Pope's return to Rome. Then, it was decided to turn back. Earlier, the last resting place was chosen. Among Jarząbcze Szałasiki forest, where the red trail gently draws near Jarząbczy Stream, a tourist camp was set up. Amid few massive, collapsed spruces, the tent was raised above the water of rapid, mountain stream. Sandwiches, coffee, tea and apples were prepared. The meal was consumed over extemporary tourist table, with folding chairs. The rest took around half an hour. During the breather, Pope memorably said: “... if I could just sit here a little longer”. This accumulated the the whole nostalgy of touristic contact with nature, but the time of flight was coming near, and the return was imminent. Before leaving the camp, the Pope came to busting stream, leaned down, dipped his hand into mountain Tatra water and crossed himself. The return took place on the same route. Again Andrzej Zięba Gala's hut was visited, where his whole family awaited. Tables and stools were took in front of the hut. The Pope sat on the stool before a table full of cheeses and oscypkis. Talks were about highlander life on glades and hardships of shepherd's life. From Gala's home to PTTK shelter, the group came through shortcut on Chochołowska Clearing. Highlanders gave Pope oscypek cheese for “road to Rome”. Back in shelter, John Paul II took off his touristic footwear, got dressed in new cassock and after eating the meal, he got into awaiting car to leave Chochołowska Clearing. Highlanders, owners of Seven Municipalities to which Chochołowska Clearing belongs to, wishing to commemorate polish Pope's stay in Tatra, raised highlander chapel in the place of his rest and camp in Jarząbcza Valley. On the large rock, a bronze plate was placed, holding Pope's words: “Today, I could see Tatra mountains up close and breath the air of my youth” along with a footnote: Pope John Paul II came here on 23 V 1983, while above the cross on wooden chapel, the inscription was situated: “Thank You God for sending us our Holy Father (Ciche village authorities)”. A part of red trail from Chochołowska Clearing to Trzydniowiański Wierch, on which Pope John Paul II walked is additionally marked by yellow stripe. Now it's called a “Pope trail”. 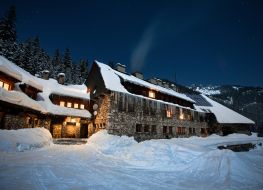 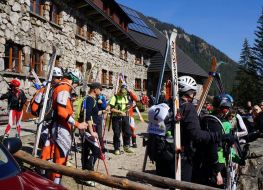 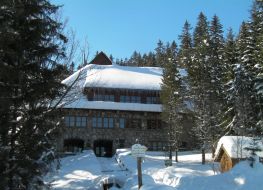 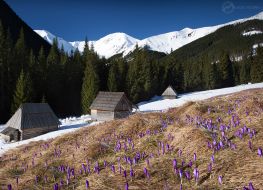 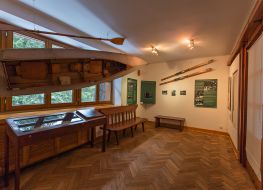 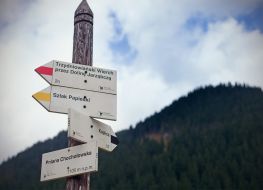 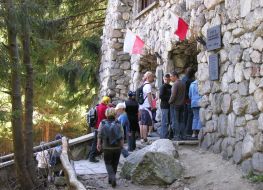