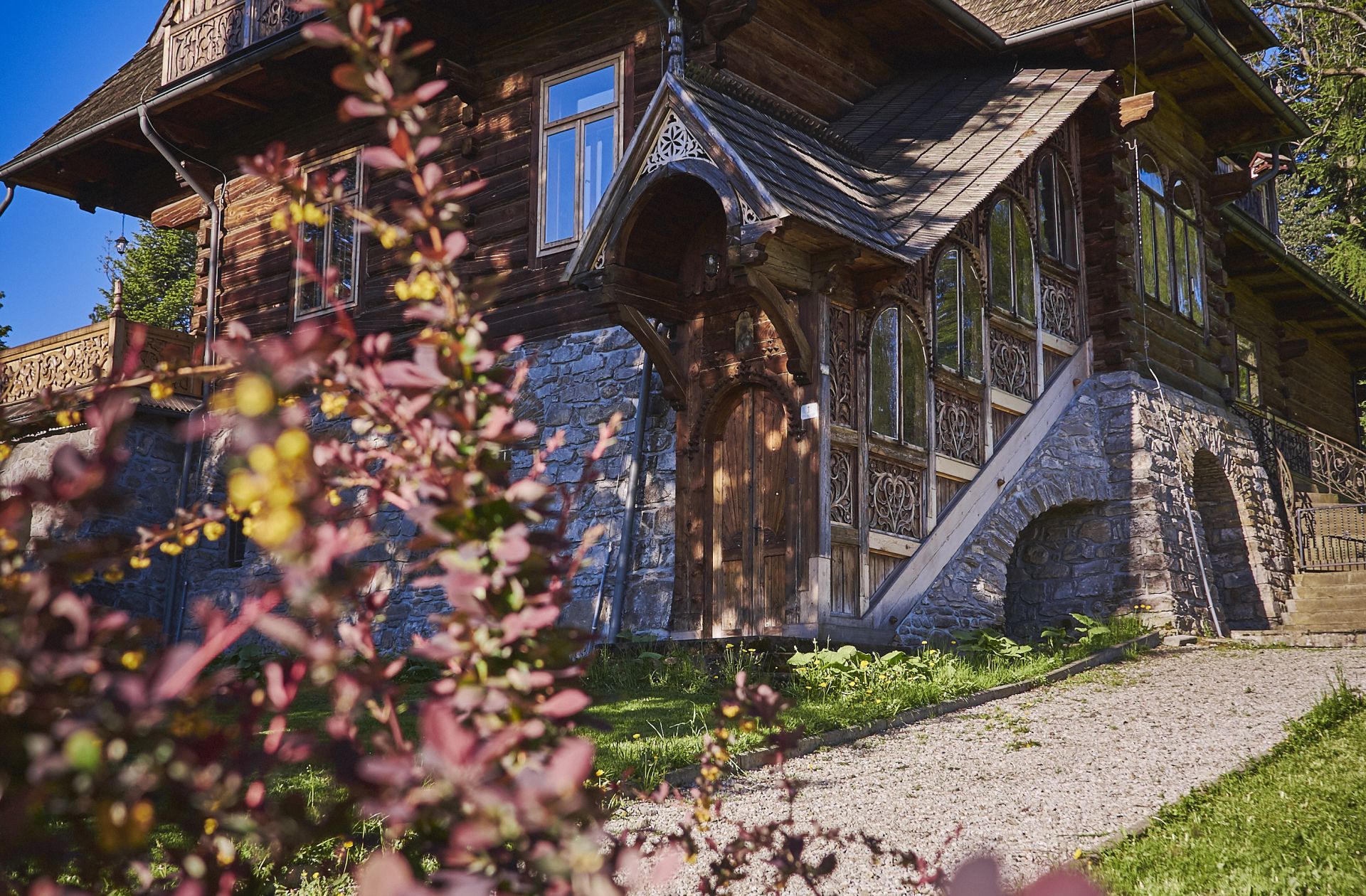 Oswald Balzer (1858 - 1933), a legal historian, represented the Polish side in a border dispute over the Morskie Oko, which was finally resolved before the court of law in Graz in 1902. We partly owe it to his endeavours at the time so that the most beautiful glacial lake in the Tatras remains within Poland's borders today.

We start off our walk at the Jana Pawła II roundabout, and go along Droga na Bystre street, then after some 600 meters turn left onto the Droga do Olczy street, and then, almost immediately, turn left again into a quiet lane of Droga na Koziniec. There are two interesting sites to be seen there.

The Włodzimierz and Jerzy Kulczycki Art Gallery, Koziniec 8 st,
A Branch of the Tatra Museum

A masonry building built in the manor style in the early 1920s by the Koziański family. It accommodates an exhibition of eastern carpets donated by Anna Piotrowicz-Kulczycka, the widow of Jerzy Kulczycki. Temporary exhibitions are also regularly held there.

The largest villa built in the Zakopane style, designed by Stanisław Witkiewicz. Its bulky structure rests on a sizable stone foundation, boasting numerous windows and bay windows, while its towering silhouette gives it an uncanny appearance of a castle. More appeal is added by the staircase leading up to the front door, roofed over and glazed with highly decorated, arched windows. The house, built in 1897, also boasts an open veranda supported by a massive stone foundation. From the very beginning, Willa pod Jedlami was associated with the Pawlikowski family, as Stanisław Witkiewicz had originally designed it for Jan Gwalbert Pawlikowski.

The Pawlikowski family was closely associated with Zakopane and the Tatra Mountains. Its members left their mark in the history of mountaineering, but were also known as ardent protectors of nature in the Tatras, and the champions of various worthy social causes. In the 1920s,the first wife of Jan Gwalbert Henryk Pawlikowski, Maria Pawlikowska - Jasnorzewska, a poet, used to stay at the Villa pod Jedlami. The Tatra themes are liberally scattered across her poetic output (e.g. "Edelweiss", "Crocuses", "The Cross on Mt Giewont", "The Ciemnosmreczyński Forest").

In the garden, close to the Villa pod Jedlami, there was a Cottage under the Ash Trees, in which Zofia Radwańska - Paryska (1901 - 2001) and Witold Henryk Paryski (1909 - 2000) lived, a couple of great explorers and researchers of the Tatras, authors of many fine publications; The Great Encyclopedia of the Tatras being their lifetime masterpiece. The house burned down in 2008, after they had died. Fortunately enough, their extensive library and collections had previously been moved and safely archived by the management of the Tatra National Park.

The Zakopane style in architecture
By the end of the 19th c., when Zakopane was already being deemed "the hub of the world", Stanisław Witkiewicz (1851 - 1915), a painter, writer, art critic, free-lance journalist, originally from Samogitia (Lithuania), deeply fascinated by the Tatra Mountains and the Highlands culture, especially by the wooden architecture of the Podhale region, creatively put together what is presently known as the Zakopane style in architecture. The style was firmly anchored in the folk architecture, i.e. simple huts and cabins of half-log frame structure, but Witkiewicz added to it substantially by way of augmenting it with other regionally characteristic components, e.g. foundations made of broken stone, a prominently gabled first floor set perpendicularly over the front part of the ground floor in the house, large arched windows, wooden carved pinnacles in the shape of Turk's caps lilies (a wild flower found throughout the Tatras) crowning the end-wall beams shooting into the sky, open verandas, and numerous ornaments making creative use of popular Highlands motifs. The most characteristic structures built in the Zakopane style are the Koliba, Pod Jedlami, and Oksza villas, and a chapel in Jaszczurówka.

Making our way back from Koziniec, we return to Oswald Balzer street and keep on walking further along. Some 800 m away from the pope John Paul II roundabout, to our left we pass a characteristic landmark, a spacious masonry building at the back of a garden housing a University Clinic of Orthopedics and Rehabilitation, Jagiellonian University School of Medicine, in Zakopane. The building, designed by Jan Koszczyc - Witkiewicz, a nephew of Stanisław Witkiewicz, was built in 1923 - 1938. Walking further on, we pass to our right the towering Mt Nosal, with a downhill ski run on its steep northern slope. In wintertime it makes one of the most popular skiing sites in Zakopane.

Oswald Balzer street runs further along through Jaszczurówka. This is the district of Zakopane, which originated its name from the word "lizard" (jaszczur in Polish). This is how the highlanders used to call the salamanders often found there.

To our right, we pass a chapel and a small convent of the Ursuline Sisters (Jaszczurówka 2). It was where cardinal Karol Wojtyla used to stay for a breather throughout the 1960s and 1970s. He also paid a visit there during his official papal trip to Zakopane in 1997.

After approx. 2 km walk from the pope John Paul II roundabout, to our right opens the mouth of the Olczyska valley. A sub-alpine type of valley, which leads to Polana Olczyska glade (35 minutes), Polana Kopieniec glade (3.7 km, 1 hour 15 minutes), or toKopieniec Wielki mount (1328 m a.s.l.; 4 km away from the mouth of the valley, about 1 hour 30 minutes). Although the summit is not particularly high, it commands a wide panoramic view starting off from Mt Havran in Slovakia through Hala Gąsienicowa, then all the way up to Mt Giewont, and further on to the Western Tatras and Zakopane. The valley is just perfect for ramblers and hikers.

In 1839, Ludwik Zejszner discovered a hot spring at the mouth of the Olczyska valley. This place was pretty popular with salamanders and other amphibian species. Following closely the example set by various "lizards", the bathers also swarmed in. In the years 1861 - 62, Adam Uznański commissioned the construction of the first pool. Apparently, the place proved so popular with the visitors and bathers, they had to await their turn in line. "As of today, I will proceed to rinse myself off in Jaszczurówka" - wrote Henryk Sienkiewicz back in 1893. Eventually, in 1934 a large sports swimming pool was built. In 1957, with a view to extending the hot spring bathing site, another well was drilled. The drill hit a large reservoir of cold water, though, which subsequently flooded the hot spring.

At the mouth of the Olczyska valley, at the site of a former bathing pool, there is a Center for Active Protection of Amphibians and Reptiles, open to the public. Various species of amphibians have at their disposal several artificial reservoirs that look like a naturally overgrown swamp. The place is populated by plenty of common frogs, toads, mountain and Carpathian newts, and spotted European salamanders.

Approx. 250 meters from the mouth of the valley, on the bend of Oswald Balzer road, to the left, in the midst of a glade there is a small wooden chapel - a veritable crown jewel of the Zakopane style.

A branch church of the parish in Toporowa Cyrhla. A wooden chapel designed by Stanisław Witkiewicz, built in the years 1904 - 1907. It rests on a high foundation made of broken stone. The interior is graced with stained glass windows, also made to the original design of Stanisław Witkiewicz, depicting the Black Madonna of Częstochowa and Polish National Emblem (to the right), and Madonna Ostrobramska, and Lithuanian National Emblem (to the left). The side altars, also carved in wood, date back to the 1950s, though. They were carved by Janusz Janos from Dębno, just like the figure of Pensive Christ placed right above the entrance. A characteristic wooden chandelier dating back to WWII was made by Stanisław Zdyb. 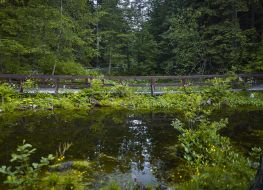 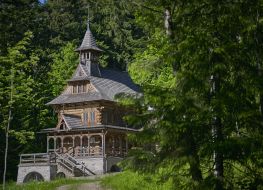 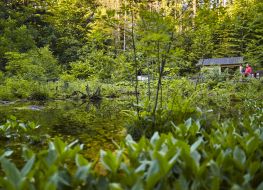 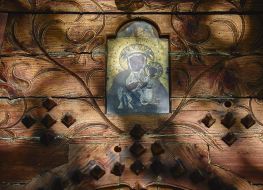 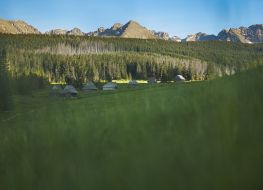 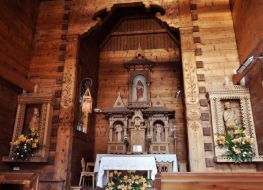