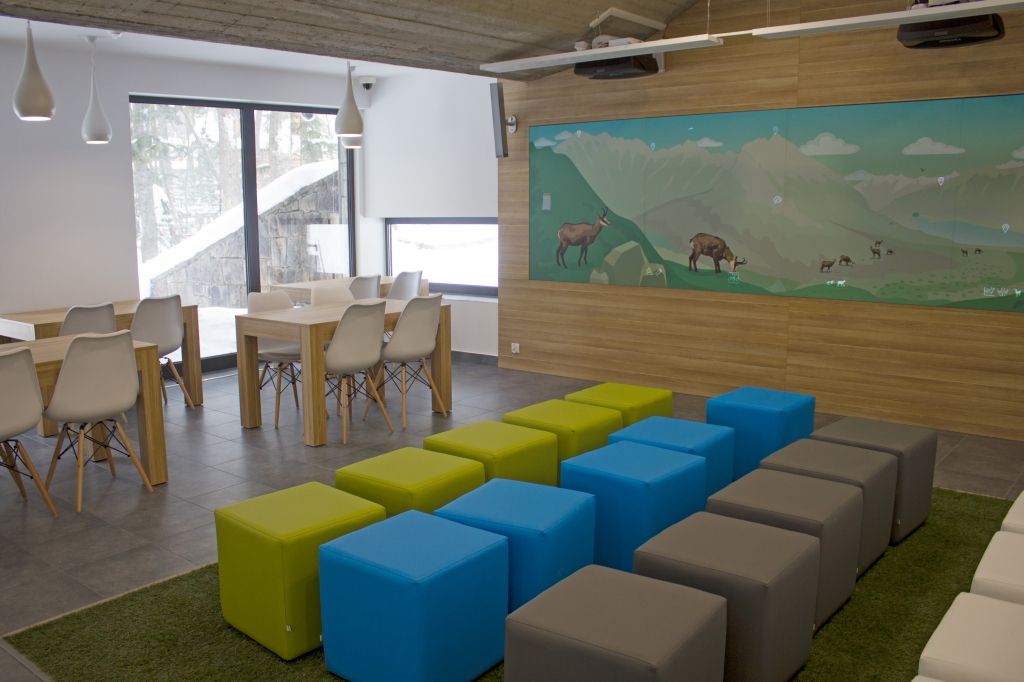 The Center carries out educational activities by running nature protection and Tatra mountain themed exhibitions, nature film showings, publishing press, teaching classes, contests and lectures. Nature Education Center TPN is the most up-to-date object of this kind in our region. It includes 4D cinema, the largest Tatra model in Poland, exploration hall and many other attractions.

Educational walk over facility takes around half an hour while visitors certainly won't be bored. This first stop is at the biggest model of Tatra in Poland – presented with multimedia feautres and narrator commentary. The next stage are realistic dioramas, a three dimensional models depicting meadows, forests and man's influence on ecosystem, this time narrated by animals themselves. Nature films, showing Tatra enviorment from wild animal's perspective, are a nice supplement to the exposition. Film screenings are set in brand new cinema halls. What's more, the showings are far from being ordinary. One of cinema halls, with implemented 4D technology, grants additional thrills like "wind" blows or sudden chair movements. Viewers are also given special 3D glasses, thanks to which the screen gains more depth of view.

During the tour it's also possible to take a peak inside the cave. It's nearly identical to the real one, being as moist and chilled. You can hear about what's going on in Tatra undergrounds, who lives there and why.

For kids the explore hall awaits. There are educational video games, which teaches map orientation, memory, helps to recognise animal sounds and practice observation. If kids prefer jumping and running similar to goats and deers, they can also do that, as the hall is equipped with Kinect video games. What the marmot's day looks like? This is a theme of four player game where the players become marmots.

Those who would like to know more about nature preservation can see short films, for example about why there are no trashcans in the Park, why you should not feed the wild animals, are bark beetles friends or foes and many more. Also those who are more eager for exploration and observation of nature can use one of our interactive tables. The rules here are simple. User picks one of exhibit drawers. These contain models of various nature elements, like amphibians, reptiles, rocks, cones, bird eggs. The thematical presentation is then displayed at the table, and the user's role is to name current exhibit. There are lots of additional quiz questions provided. This teaches perception, patience and logical thinking. The final feature are stereoscopic stations. You can watch 3D photographs of wildlife there.

Centrum renovation was sponsored from European Founds for Operational Program Infrastructure and Nature.