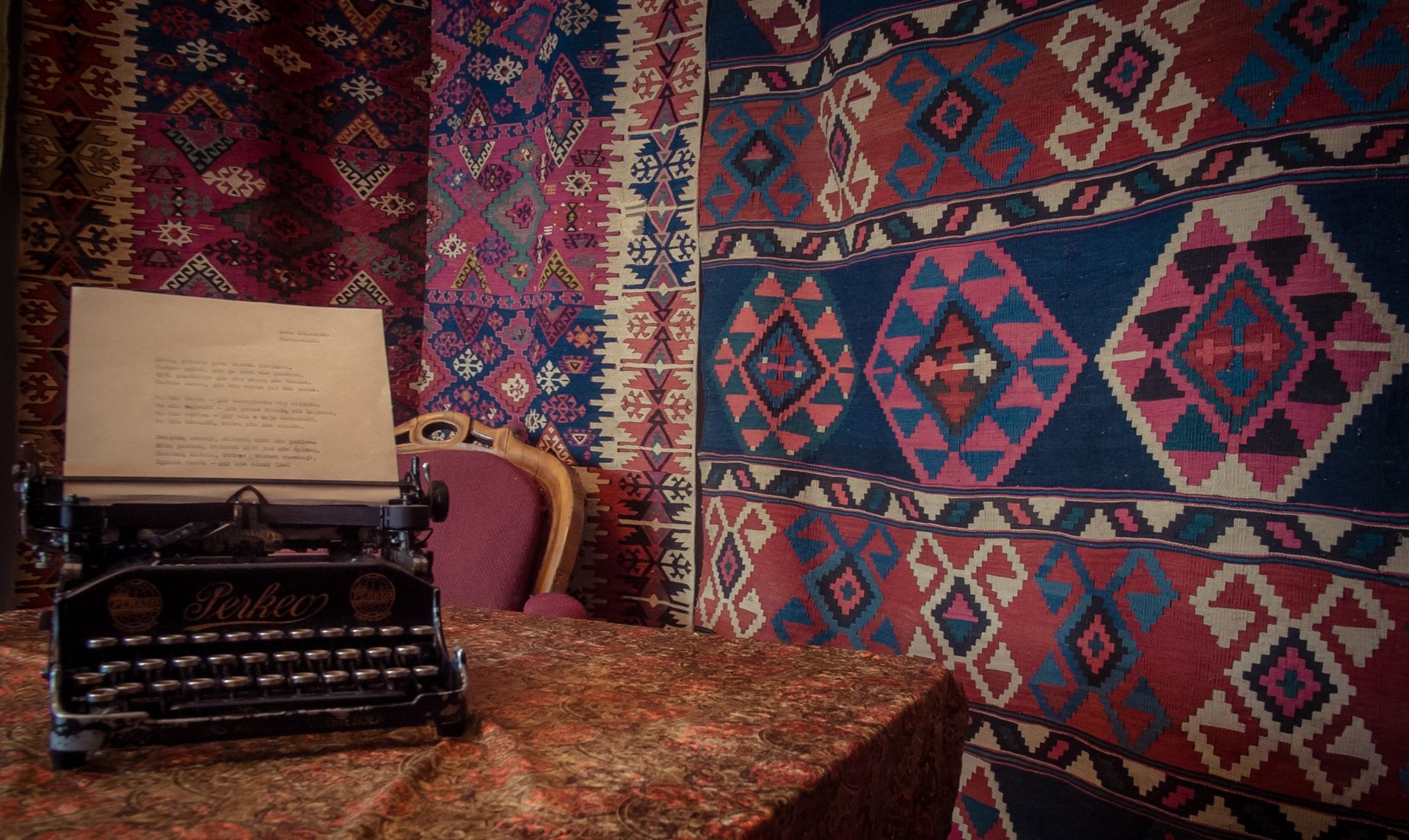 The gallery, a marble building in manorial style, is located near famous "Pod Jedlami" villa and was built in early 1920s by Koziański family. After the World War II the house was bought from heirs by the Council of Ministers. Koziański's villa became a representative object, often visited by prominent politicians of PRL (Polish People's Republic), i.a. by Józef Cyrankiewicz, thus it was known commonly as "Cyrankiewiczówka". In 1981, thanks to the local Solidarność movement, the building was given to the Museum, aiming for Eastern Carpets Gallery, which were earlier donated by Jerzy Kulczycki's widow, Anna Piotrowicz-Kulczycka.

Collection's origins reach back to 1906, when Włodzimierz Kulczycki (1862-1936), professor and later rector of Lviv Veterynary Academy, bought first exhibits. Collecting oriental fabrics and carpets was scientific at first; Kulczycki obtained literature on carpets and systematicaly learned about this field of Eastern material culture. He himself was an author of many articles on carpets. During the interwar period, Włodzimierz Kulczycki's collection was repeatetly presented on ehxibitions. His son Jerzy (1898-1974), PhD in philosophy and art historian, took the same fondness of collecting, as after the interwar period he gradually increased the set, being loyal to father's concept of resticting collection to carpets from every nation of Anatolia, Central Asia, Iran and Caucasus.

During the World War II period, the collection didn't had any major losses. In 1946, when Pole's repatriation has begun, Kulczycki found himself in Warsaw and maintained connection with Warsaw University. Thanks to support of many people, the collection was saved and stored under the double floor of Kulczycki's one-room flat. Because of Jerzy's health condition, the family moved to Podhale region. Before that though, it was decited to split the collection and sell its part to Wawel in Cracov, where 64 luxorious and palatial objects were moved. No less valuable, folk carpets were transported to Murzasichle in Podhale, where Kulczycki family built a house. According to her hubsand's last will, Anna Piotrowicz-Kulczycka donated the gift to the nation and entrusted it to the Tatra Museum.

The first time this part of the collection was shown was in Art Exhibition Bureau in Zakopane in 1978. After it reached Koziniec Gallery, its exhibited annualy, mostly in summer. The collection consists of 65 objects – carpets and cloths coming from many regions and nations of Asia: Ian, Turkestan, Afghanistan, Western Asia, Caucasus. Carpets and cloths bring delight with their subtlety and harmony of colors, richness and mysterious symbolism of ornaments.

Another collection which found its place in Kulczycki Gallery is of paintings and graphics of contemporary artist, Marek Żuławski, donated by widow Maryla Żuławska in 1986. Marek Żuławski (1908-1985), son of Jerzy Żuławski and Kazimiera from house Hanicki, spent his childhood in Zakopane, where his family lived in Łada villa till 1920. Many prominent writers, poets and painters met in Żuławski's salon: Kazimierz Tetmajer, Jan Kasprowicz, Leopold Staff, Władysław Orkan Tymon Niesiołowski, Artur Rubinstein, Stanisław Ignacy Witkiewicz, Władysław Reymont, Stanisław Przybyszewski, Tadeusz Boy-Żeleński, Kazimierz Sichulski. The youth of Marek Żuławski and his brothers, Juliusz and Wawrzyniec (died in Alps) passed under mountain-climbing, as they were first to reach many Tatra peaks. Marek Żuławski's painting talents revealed themselves in his final junior high years. After finishing junior high school in Toruń, where his family relocated from Zakopane, he moved to Warsaw and started studing in the Academy of Fine Arts under professors Tichy, Kowarski and Pękalski. After graduating he moved abroad in 1935. Two years later he settled down in London, where he lived until the end of his life. In his Autoportrait, a literary memoir, he himself describes his art with outstanding accuracy:
"My painting is full of allusions. Its goal is to create mood and atmosphere which provokes thought. I wish for painting to be something more than arithmetic sum of its parts, to be a symbol or visual representation of experience. It's about expressing your worldview, about telling something which cannot be told by other means than painting. It's about creating new image of a man in today's context."

Kulczycki Gallery answers mosty to Art Department. Here the collections not included in permanent exhibitions are exposed. These are thematic series like Tatra landscapes, Tatra and Podhale in watercolors or portrait from Tatra Museum stocks. But this is also a place of etnographic and nature exhibtions, as well as ski history displays. In 1996 in Kulczycki Gallery, the first monographic exposition of Stanisław Witkiewicz's art was presented. Year later due to visit of John Paul II, the old glass painting from Tatra Museum exhibition was opened. In 1998 visitors could see Jewels of Dzieduszycki Ordination natural exhibition, imported from Lviv. The Gallery also hosted Zakopane editions of larger exhibitions made by National Museums in Warsaw and Cracov: Tadeusz Brzozowski. Paintings between Giewont and Parnassus, Podhale folk inspirations, The World of Lela Pawlikowska, Rafał Malczewski and the myth of Zakopane, Halny Wind. Tatra paintings and impressions.