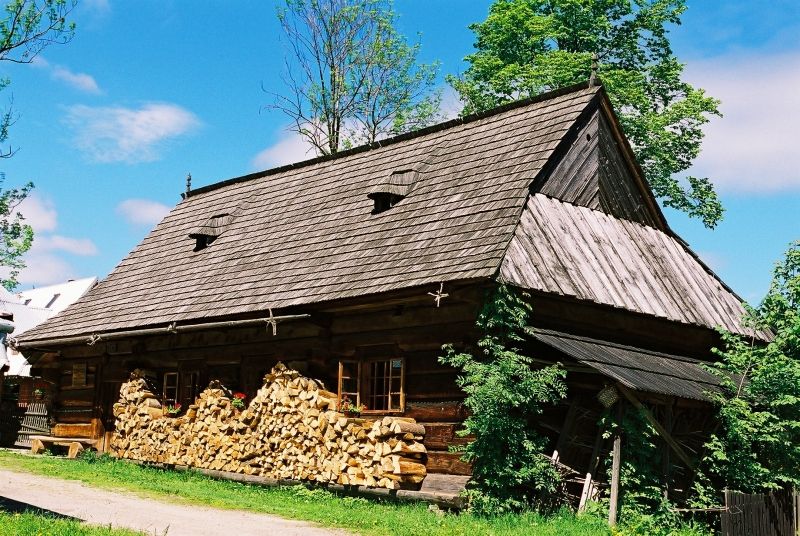 Jan Krzeptowski Sabała, known as Sablik or Czakor (1809 - 1894). A folk storyteller, musician, hunter, companion of the Tatra expeditions of Dr. Tytus Chałubiński, a legendary Podhale figure. Born here on January 26, 1809, he was one of the four sons of Zofia (nee Tylk) and Jan Gąsienica. Together with his brothers, he assumed the surname Krzeptowski. In 1833, he married Teresa Walczak and moved his wife to the Sabała farm in Kościelisko. His brother Jędrzej remained in the hut on Krzeptówki. Sabała did not do much farming work. He was attracted to free life, hunting in the Tatras, old music and highlander songs, happy tales in chosen company.

He met and befriended Dr. Chałubiński in 1873, bringing him into the circle of eminent people of the era who were staying in Zakopane at the time. Attached to native tradition, the gifted storyteller and musician enjoyed hunting. Sociable Sabała gained numerous friends and widespread popularity. In an environment fascinated by Podhale culture, he was considered a symbol of old highlander culture.

In the literature, the tales of Sabała, folk tales and memories of hunting expeditions were stained with a certain philosophy and humor. They were written byStanisław Witkiewicz, Bronisław Dembowski, Henryk Sienkiewicz, Andrzej Tylka Suleja, Andrzej Stopka Nazimek, and others. Tales of Sabała inspired other writers including Kazimierz Przerwę Tetmajer and Władysław Orkan. The old highlander melodies played by Sabała were developed by Jan Kleczyński. Sabała died on December 8, 1894 and was buried in the Old Cemetery in Zakopane. Society’s respect for Sabała was evidenced by the placement of his figure at the monument to Dr. Chałubiński created by sculptor Jan Nalborczyk.

Sabałą’s Hut is a family museum run by the descendants of the Krzeptowski family, famous in Podhale, and is the oldest house in Zakopane from the turn of the 19th century.Sabała’s hut represents the Silesian-Spiš building style. Much bigger that it was in those days, the cottage consists of a hall with a bread oven, a basement and cold room, and a main room, with the equivalents of white and black rooms. Outside of the cottage there is an old, covered well. The cottage is full of old furniture, tools and equipment, and old family photographs that will make any visit a fascinating history lesson for everyone.