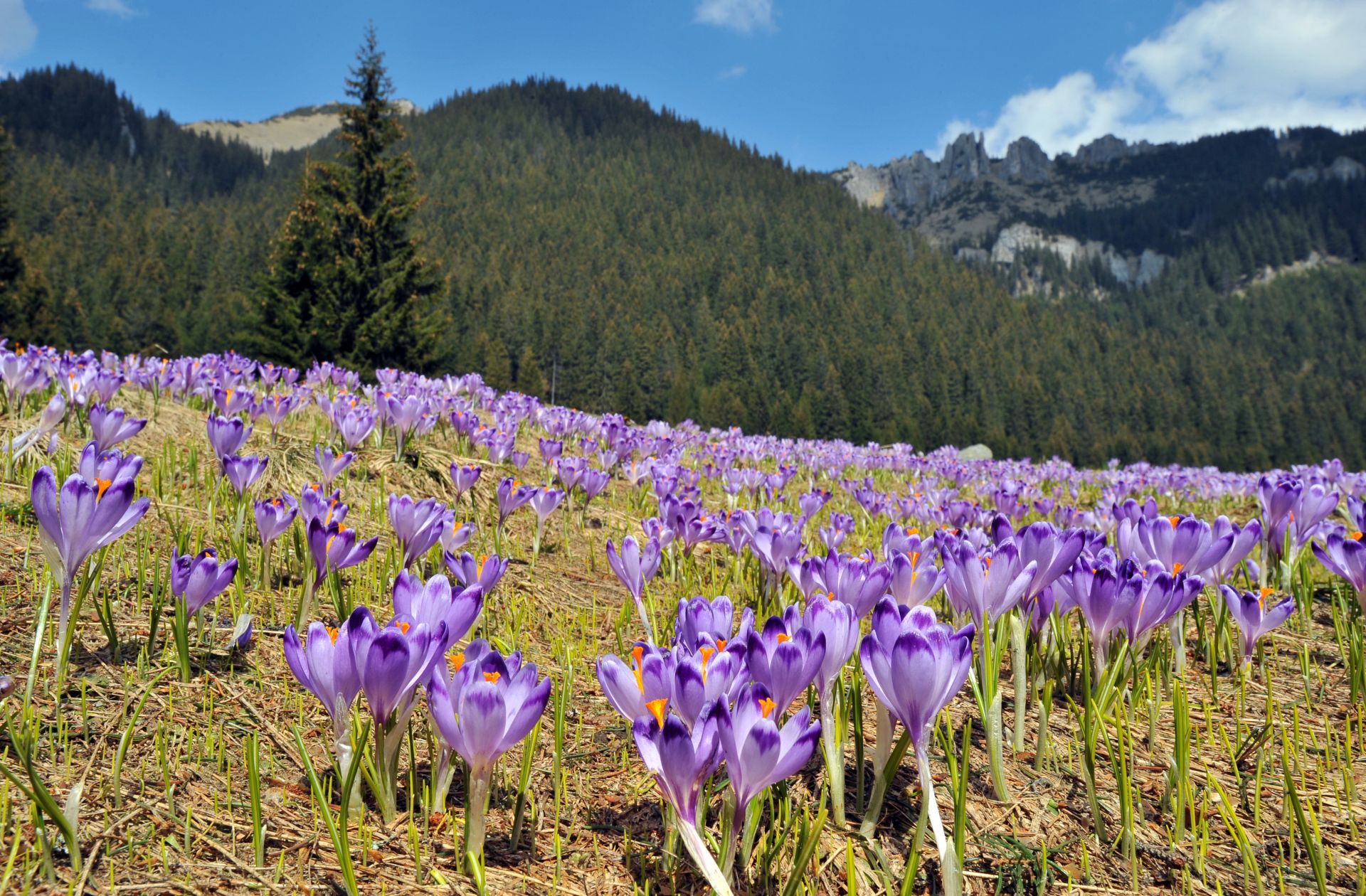 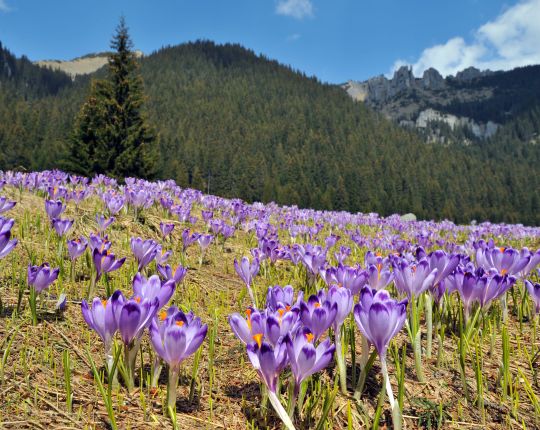 Chochołowska Valley is famous not only for its beautiful views, but also for the amount of crocus flowers that bloom every spring on its clearings. It's the only place in polish Tatra where you can walk your dog and one of two available bike tracks. The furthest point that both cyclists and dog owners can reach is PTTK Shelter on Chochołowska Clearing.

We begin our journey on Siwa Polana where are, apart from ticket booth, stalls, cab stop and Rakoń tourist train. We can take transport to Huciska clearing. After passing the barrier, we get inside the valley by aphalt route. Few private possesions are visible here. We can also spot the cross which reminds of John Paul II's chopper landing on Siwa Polana in june 1983. After passing the last of wooden houses, we get into the forest. At its edge, on the right side, there is an info board that informs us that we're not only on Tatra National Park's, but also Forest Union of Authorised 8 Villages' territory. On the left we see Dolina Lejowa trail outlet, which goes on the edge of Siwa Polana. The asphalt road continues. We should be careful for carriages and trains passing by. After around 40 minutes of march, past Niżnia Brama Chochołowska and Chochołowskie Wywierzysko, we get to Huciska clearing. This is where the final carriage and train stop is, as well as toilets. This is also where the asphalt track ends. We go further onto gravel path. At Dudowa Valley outlet, one of the side branches of Chochołowska Valley, lies beginning of Regle Path (black signs), leading far into Kuźnice region. After around 20 minutes on the right side we pass Leśniczówka Chochołowska (old shelter of Blaszyńscy), and after 5 minutes we cross Starobociańska Valley exit and two trail openings – yellow on Iwaniacka Pass and Kościeliska Valley, and black for Ornak massif. From this point the route ascends a little. Approximately after 15 minutes we get to another trail crossing. This time from our path (green) branches red one on the left, where we can reach Trzydniowiański Wierch, and later through Jarząbcza Valley get into PTTK Shelter on Chochołowska Clearing. We however continue going through the bottom of Chochołowska Valley. It takes 20 minutes from the place where red trail connects with green, leading to PTTK Shelter on Chochołowska Clearing. The route here becomes nearly flat, even leading downwards a little. After a while we see first huts standing on the edge of wide Chochołowska Clearing, right under Bobrowiec feet. In summer there is cultural sheep grazing where one can taste fresh, sheep cheese. On the upper side of clearing lies small, delightful, wooden John the Baptist chapel. From the upped side of clearing spreads panorama on Chochołowska Valley surroundings (Kominiarski Wierch, Jarząbczy Wierch, Wołowiec, Rakoń, Bobrowiec with Chochołowskie Mnichy). In 10 minutes from Chochołowska Clearing we come to shelter by slightly ascending path, passing trail exits: red (Jarząbcza Valley – Trzydniowiański Wierch – Chochołowska Valley), yellow (so called Papal inside Jarząbcza Valley) and green (Upper Chochołowska Valley – ridge between Rakoń and Wołowiec).